I say- whilst listening to some pretty amazing Austrian yodeling on Spotify: “Someday, before I die, I’m gonna learn how to yodel.”

The Duke of Curl (sitting nearby at the kids’ ‘puter): “It’s not that hard.”

Him: “If you can teach it to hillbillies, it can’t be that hard…” ‡‡

‡ He has taught himself how to do Tibetan throat singing. WONDERFULLY weird.

‡‡I come from a long line of Northern hillbillies, known as “townies”, and even though he doesn’t like it when I say so in this context, Studmuffin’s family is from West Virginia, he himself was born in WV and his parents are first cousins by marriage. Plus we have had – for months – a non-working car in the yard. It isn’t up on blocks, though…..

My little knitting group hasn’t been meeting regularly, but  3/4ths of the group did get out this past week and it was lovely to see them.  One of the the 2 ladies with the same first name, who now has the blog nickname of “SaTwo”, was delighted to show me a “yarn crime”, reminding me in the process that it’s been AGES since I did a yarn crime post. Duly noted and I’ll get right on it…perhaps for Hallowe’en or sometime in November…..  Here’s what she showed me: 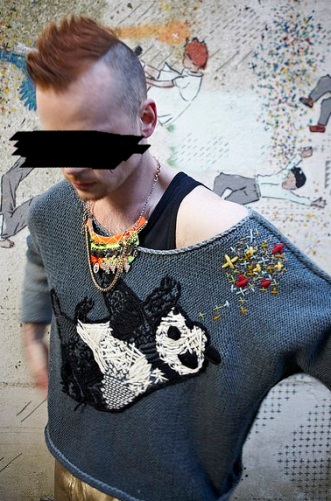 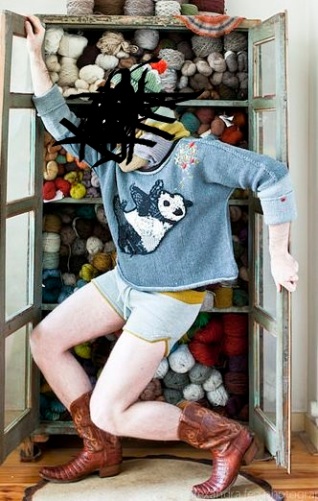 I drew the black marks -fyi.  I love this designer most of the time, but this time…..no. Just no.  I asked the Duke of Curl for a caption, he said, “Uhhhhhhhhhhhhhhhhhhhhh….. sick boots.”

Have a lovely weekend and very happy birthdays going out to ALL the friends and family having October birthdays. 🙂

Hey y’all-got back LATE last night from those “West Virginia hills….how majestic and how grand”.  We’re tired but safe and my oh my – so many things to write about:

…to name just a few.  PLUS there’s YARN!!!!!!!!!!!!!!!  Yep, I got to visit a couple of yarn stores and bring some of their yummy yarn back home to stay with me.  There WILL be photos because amazingly enough, we arrived home with both the camera AND the charger – AND I know where BOTH of them ARE.  I gotta celebrate the victories, y’all.

For now though, I think I’m going back to bed, so I’ll leave you with this:

While in West Viginia, we went to a small amusemnt park called Valley Worlds of Fun.  It’s become kind of a regular stop on our WV soirees.  Since it was just after our 20th wedding anniversary, I inveigleld my husband into getting some pictures taken of the two of us – in a photo booth!

We didn’tfit very well into the booth, butit was fun and I like the pictures.  :o)

Didja miss me?  I’ve been in “Wild, wonderful West Virginia” for a week visiting my husband’s family ans spending piles o’ money.  We also have a NEW digital camera (hear the angel choir sing a heavenly ‘AAAH!”) so I will have pictures of the new stash enhancements veddy soon. Of course, there’s piles of yard work that needs to be done and I need to get curriculum together for school, so I’m way behind again.  Stay Tuned……