My 40th birthday will be Saturday, December 13th.  I’m pondering what this means to me.

I’m pretty sure that I’ve lived more than half my life already – I smoked like a chimney for years (I quit 14 years ago – YAY!) and although I eat very healthily these days and get regular exercise, I remain very fat. Don’t get me wrong – I’d rather be fat than still smoking (I was less fat as a smoker)!

I guess my only true regret is having to deal with these mysterious allergies that have been pestering me for the last year. I wanna be forty and fabulous, but mostly I’m forty and wheezy. Other than that and some peri-menopause woes, I’m pretty good healthwise and that is such a blessing!! I ‘ve known quite a few people in the last 3 years especially who have had cancer (and not everyone has beat the disease unfortunately) and so much of your life goes on hold when you are ill. The daily challenges are SO much harder when your health isn’t good and I am so thankful.

But it could all end tomorrow – and I guess that’s OK too. I would like to see the kids all grown and happily settled into adulthood, but none of us know what tomorrow brings, do we? I’ve got lots of wonderful yarn to knit*…life is good! 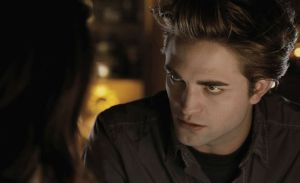 I’ve been very much into the Stephenie Meyer books over the last year and a half and got a chance to go see the movie, Twilight, last Wednesday.  It’s really good in some places – way better than I expected, and in other bits, it is pretty awful – worse than I expected.  It’s a long movie (2 hours)  but the time just flew by for me, and I will go see it again a few times (rather unusual for me).  I’ve read a good bit about why this particular story is so fascinating – Studmuffin sent me this link to a really nice article about it (http://www.theatlantic.com/doc/print/200812/twilight-vampires ),

but I don’t think any of the things I’ve read have hit on why I find them so good (I won’t bore you with it all now….I’ll wait ’til later).  But there are couple of things that I just love about this Twilight phenomenon that I want to share now: 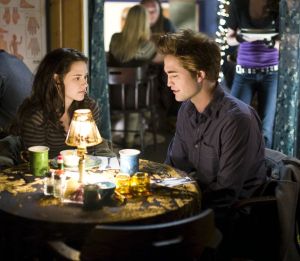 (I think perhaps the restaurant scene is my favorite…….)
If you haven’t read the books, you might not enjoy the movie since there’s so much backstory that really cannot be included.  It’s true that the books are NOT great literature, but the storytelling is VERY good; you really get drawn in by the characters and the story and I do recommend them( the audiobooks are my favorite).  But I gotta say…… 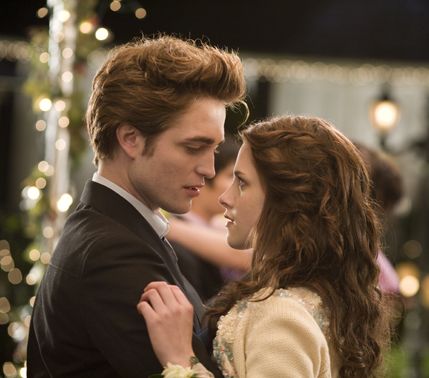 Poor Rob Pattinson!
He’s gonna have to deal with being a teen heartthrob forever, and he seems like a pretty decent guy who’s rather serious about acting.  He does quite a fine job in Twilight with a very difficult character, but he’s got a lot of learning to do before he becomes a great actor; it would be a shame if his admittedly very nice looks overshadow his acting for always.  AND I’m sure the female fans will make his life a misery off and on for the rest of his life – I’m sure he had no idea that Twilight was gonna be so freaking huge!  Fortunately, he’s a Brit and that may keep him from some of the crazy excess of egomania that is such a manifestation of Hollywood.
How’s that for fluffy?
—————–
*  Of course, new yarn is always welcome, should anyone wish to give me some (tee hee)…and I will probably post a wishlist (mainly for my mum’s benefit) by the end of the week (not that you’re interested but just in case…)